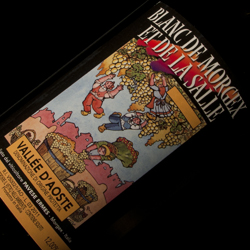 Morgex et de la Salle is the northernmost sub-region of the Aosta Valley, falling in the shadow of Mont Blanc on Italy’s northwestern border. The vineyards here are some of the highest in Europe, and the subsequent wines have a distinctively Alpine character. The vineyards lie on the steep slopes that sit above the narrow valley of the Dora Baltea river, just nine miles from the border of France. Wines from this region are rarely exported as local demand far exceeds production.
Pavese Ermes is a youthful producer who works with the region’s native grape variety, the seldom-seen Prie Blanc. Because the region is so isolated, Pavese has been able to work with the original pre-phylloxera root stock since the disease never hit the area. Pavese’s wines are characteristically fresh, delicate, and floral with a marked minerality. This particular one has aromas of dried citrus peel, white flowers and honey with a lean palate showcasing vibrant acidity and tart citrus flavors.

Located between Brazil and Argentina, Uraguay stands as one of the most important countries in the Latin American wine scene. Vines here benefit from the country’s location – at the same latitude as the wine growing countries of Argentina, Chile, South Africa, Australia, and New Zealand – and mild weather thanks to a maritime influence.
Originally from southwest France, Tannat has become Uraguay’s most emblematic varietal by virtue of its rich, smooth texture without the astringency it’s known for in its native land.
Bodega Garzon was created in 1999 and has quickly become one of the country’s top quality producers as well as a model of sustainability. The winemaker, German Bruzzone, focuses on producing wines that are pure and reflect the genuine character of the terroir. He does this by selecting only the best grapes and avoiding external additives such as commercial yeasts and enzymes. Garzon’s 2014 Tannat is elegant and powerful with beautiful aromas of ripe bramble fruits and tobacco. and a palate with flavors of dark plum, blackberry and chocolate.