“I try to make wines that give people joy. In the past wine was a food, it was necessary for sustenance. Today that is not the case, we choose to drink for pleasure. I want to make wines that bring people happiness.” – Aldo Vaira

It was a controversial decision in 1972 for Aldo Vaira to leave Torino and found the G.D. Vajra winery (Vaira for the family name, Vajra for the winery) in the hamlet of Vergne high in the hills overlooking the village of Barolo. At the time most in the Piedmont were still leaving the countryside for the city in search of a better life, but Aldo, born in Torino, had fallen in love with the life of a wine grower a few years earlier when his father had sent him to spend the summer in the country after he, Aldo, had shown a fleeting interest in the protest movements that were gaining momentum in late 1960s Torino. And so one temporary rebellion brought about another more permanent one, and though the family had owned vineyards in the area for several generations, wines were bottled under the name Vajra for the first time.

In the beginning, Aldo and his wife Milena kept the winery running nights and weekends while Aldo taught winemaking at university in Alba. Over time they built upon the estate’s holdings, eventually increasing to about 40 hectares which are farmed sustainably. From the beginning G.D. Vajra was a family endeavor for Aldo and Milena with both husband and wife taking a lead role in the operations of the winery and vineyards – and their love of the land is abundantly clear when they speak about their wines and vineyards. This love and enthusiasm for the family’s land and (new) tradition has obviously taken root with the next generation as well, as Aldo and Milena have been joined by their daughter Francesca and their sons Giuseppe and Isidoro (the youngest).

The biggest recent development at G.D. Vajra (other than Giuseppe and his wife welcoming their first child and the next generation of the Vaira family last spring) is the acquisition of the Luigi Baudana estate in Serralunga d’Alba. For several years the Vaira family worked alongside Baudana before purchasing the 4.5 hectare estate in 2008. The Baudana estate is being operated separately from G.D. Vajra and is overseen directly by Giuseppe, Francesca, and Isodoro, allowing them, as the family winery allowed their parents in 1972, the opportunity to establish themselves in their own right. Of this development Antonio Galloni wrote in the Wine Advocate: “I remain utterly amazed at the total transformation that has occurred under the hands of the Vajra family at what was once the old dilapidated Baudana estate, and the best is yet to come… Luigi Baudana is one of the great recent success stories in Piedmont.”

The Wines From Vajra 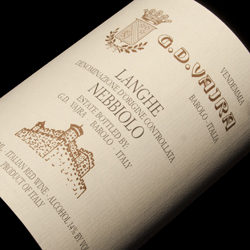 The Langhe Nebbiolo is made from younger vines which stretch from the village of Barolo to Novello in the southern end of the Barolo DOCG zone. It is fermented in stainless steel and then aged (briefly) in a combination of tank and oak vats. It is a great introduction to Nebbiolo and the wines of the Langhe, but has enough depth and character to satisfy those who are already fans. 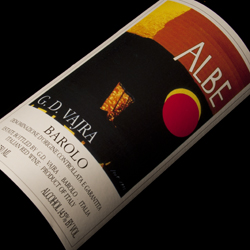 The word albe is roughly translated as “dawns” and symbolizes the differences in the three vineyards in the village of Barolo that comprise the blend. Located at slightly different points in the confused topography of the Barolo region, the vineyards Fossati, Coste de Vergne, and La Volta could be said to have three different sunrises. Made from 100% Nebbiolo, and a true Barolo di Barolo, the Albe is a perennial favorite and is aged for 36 months in large Slavonian oak casks before bottling. 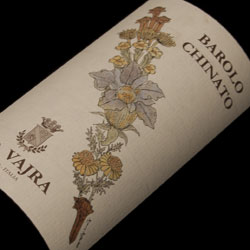 A rare treat, Barolo Chinato is made by first taking a wine that is made as a true Barolo and subject to the same aging requirements, and then infusing various bitter herbs, zests, and plant roots, as well as adding a touch of sugar and distilled alcohol to fortify the wine. Every producer has their own recipe (always a closely guarded secret), but at Vajra the list includes a number of local Piedmontese herbs, Cinchona Calisaya (quinine), and zests from Sicilian oranges. A delicious and rare digestif.