Free Tasting of Syrah from California

Share !
Join us on Thursday, February 23rd from 5 pm to 8 pm at our store for a tasting of two Syrah from California.

Of all the paths one could take leading toward a career as a winemaker, McPrice Myers followed possibly the least likely. Blue-collar to the core, McPrice grew up in east Los Angeles and after dropping out of community college (where his main focus had been baseball), he took a job at Trader Joe’s and had his first real encounters with fermented grape juice. Pretty soon thereafter he was heading north and out of the city every weekend, learning anywhere he could, apprenticing in various wineries, and following grape growers and winemakers through the vineyards.

Eventually, McPrice felt that the time was right for him to start making his own wines which led to both his eponymous label and the Barrel 27 line both focused on the varieties of the so called “Rhone Rangers,” principally Syrah and Grenache.

Barrel 27 was begun as a partnership between young, aspiring winemakers, and this Syrah, the “Right Hand Man,” has always been the flagship wine. This showcases the richness of the highly-regarded 2007 vintage in California’s Central Coast region. The Les Galets (the name by which stones in the vineyards of the southern Rhone are called) is a perennial favorite in McPrice’s line up. Filled with dark fruits, spice, and smoke, this 2008 is a serious and seriously full-bodied Syrah. 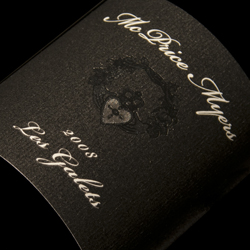